Capturing deep space and beyond

CineSys has won the bid to deliver the recording and imagery capture system for Kennedy Space Center.  The system will be directly utilized for data capture and analysis of the new Orion space program.  Borrowing from the experience and knowledge of the previous CineSys installation for the Space Shuttle’s Digital Imaging and Analysis Lab, combined with present technologies and partners, we will deploy a system that will be robust and scalable.  The general specs and customization of this system will include the ability to record numerous camera feeds and various resolutions simultaneously with failover and the ability to trigger multiple Cinedeck capture stations. Cinedeck’s engineering development, led by CEO / Founder Charles D’Autremont, has ensured the capture of two streams of lossless JPEG 2000 per deck with IRIG-B timecode for a total of 14 streams of encoding for the initial installation of this stellar project.

Drastic Technologies is also developing custom control software to manage the recorders.  Specific video formats must be generated at real time and delivered with metadata tags and time-codes including IRIG-B to be accessed immediately after launch.  Charles Kuralt who is heading up sales and overall logistics for the gear and Jason Starne, who will be the lead integrator and support to the system, were onsite for the inaugural launch of the Orion spacecraft on December 5th at 7am.

”Being onsite wasn't just for entertainment. We were looking at the current tracker cameras and evaluating workflows.

While being onsite the CineSys team provided some initial imagery capture utilizing the AJA KiPro Quad.  CineSys and their partners are eager to begin installation happening in late January or early February 2015. 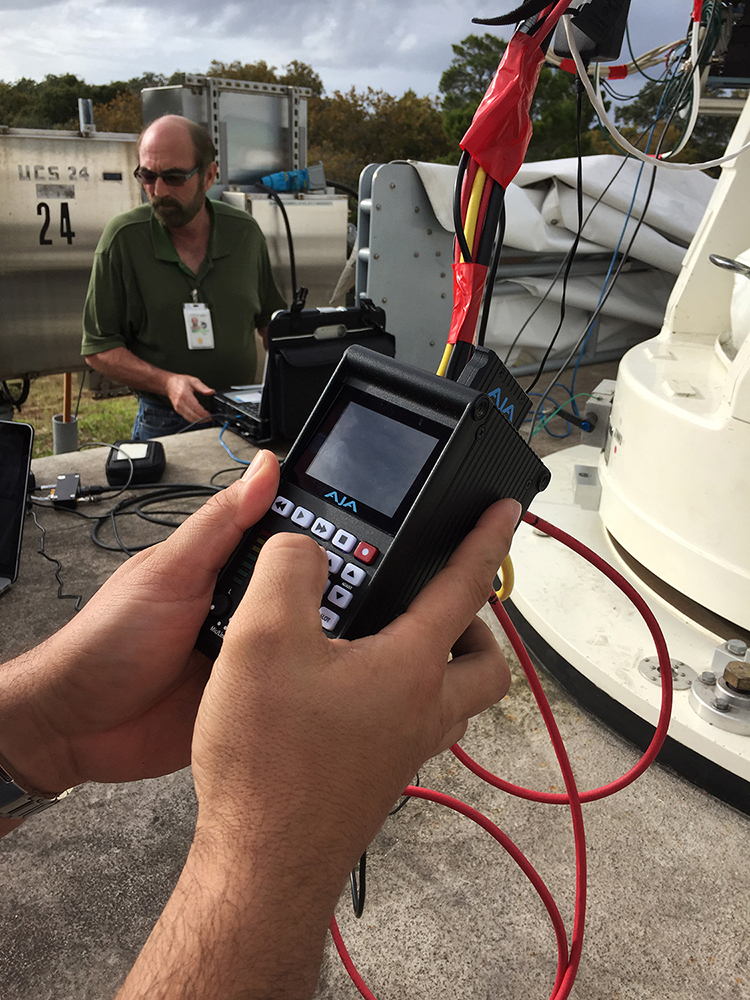 NASA’s Orion spacecraft is built to take humans farther than they’ve ever gone before.  Orion will serve as the exploration vehicle that will carry the crew to space, provide emergency abort capability, sustain the crew during the space travel, and provide safe re-entry from deep space return velocities.

On December 5, 2014, Orion launched atop a Delta IV Heavy rocket from Cape Canaveral Air Force Station’s Space Launch Complex Flight Test on the Orion Flight Test: a two-orbit, four-hour flight that tested many of the systems most critical to safety.  The Orion Flight Test evaluated launch and high speed re-entry systems such as avionics, attitude control, parachutes and the heat shield.  In the future, Orion will launch on NASA’s new heavy-lift rocket, the Space Launch System. More powerful than any rocket ever built, SLS will be capable of sending humans to deep space destinations, such as an asteroid and eventually Mars.  Exploration Mission-1 will be the first mission to integrate Orion and the Space Launch System.